One of the most iconic images in Prague are the red and white trams rolling past on the cobbled streets, and in fact Prague has one of the most efficient and reliable transport systems in Europe, but there is also a lot on offer for lovers of transport and machinery, young or old. So here’s some information on the basics of the transport system:

Trams
Prague has had its trams since the nineteenth century, when first horse-drawn and then electric cars carried people through the streets, and the routes tend to change fairly frequently. For a few years, in fact, trams even ran across the Charles Bridge, using a special type of rail that allowed the cars to pick up their electricity through the tracks rather than overhead wires, so as not to ruin the look of the bridge. These only ran for a few years in the early 20th century though as people complained about the potential damage from the vibrations and that even with the ground-rails, the trams didn’t fit in with the character of the bridge. Nowadays, there are various different types of tram going around, the oldest being from the 1960s.

Getting around on the trams can be a little daunting, but here are a few pointers to help you find your way:

The trams will stop at each stop even if no one wants off or on, and it is common for drivers to wait if they see someone running for the tram. Certain makes of tram do have disabled access. New models were introduced very recently with low floors, and are marked on the stop timetables with the wheelchair symbol.

The timetables themselves look complicated but actually aren’t. The stop you are at will be underlined, with the previous stops above and below. The hours are listed in 24 hour format, and then next to the hour are the minutes at which the tram will come. So for instance you might see 16 and then 00 15 30 45, which would give you a fifteen minute service. Some trams only run on working days, or have a different schedule on those days, so you might see ‘Pracovní Den’ at the top of one of the columns, with a little symbol of crossed hammers. Sobota means ‘Saturday’ and Nedele ‘Sunday’ (and this will usually have a cross beside it).

Once you’re on board, most trams have information displays to help you figure out where you are, often on one of the windows on the right hand side (if you’re facing the direction of travel). It depends on the type of tram, but most have automated announcements that tell you the name of the stop you’ve just arrived at, and the name of the next stop (pristi zastavka). You’ll hear, for instance, ‘Vaclavske Namesti. Pristi zastavka, Vodickova’, which tells you that you are at Vaclavske Namesti (Wenceslas Square) and that the tram will now head to Vodickova.

If you are a wheelchair user, or travelling with prams or strollers and are approaching your stop, there is a button, usually by the wheelchair space, above or on the side of the doors, usually red, which you press twice to let the driver know you need extra time to get off. In some makes of trams there are only certain parts of the car that can accommodate prams and buggies, so watch out for that.

Another thing to look out for is that sometimes the doors do not open automatically at a stop. On the door poles or, in the more modern trams, on the doors themselves is a green button, and sometimes you need to press this as you get to the stop in order to alight.

One final tip – it is very common on Prague trams for younger people to offer their seats to older travellers, so if you see an older person getting on, you may receive a few glares if you are younger and don’t offer to get up (or even a stern rebuke in Czech!)

Prague metro
The metro system was first proposed in the 1898 by Ladislav Rott, whose father, Vincenc Josef Rott, was the owner of the famous ironmongers on Male Namesti (now the Hard Rock Cafe, but you can still see V.J. Rott’s name in the decoration on the front of the building). Ladislav Rott put forward the idea to take advantage of the excavation work going on in the city at the time as the new sewers were laid, that while they were digging tunnels anyway, they could put in a sub-surface railway system. The city council weren’t convinced, however, and would not grant permission for the scheme. Subsequent proposals were also turned down and in fact it wasn’t until 1967 that the council finally warmed to the idea and work commenced on the Prague metro.

Nowadays there are three lines, A, B and C, with interchange stations at Florenc, Mustek, and Muzeum stations. All three lines were part of the plan but Line C was the first to go into regular service, in 1974, with trains running between Sokolovska station (now Florenc) and Kacerov. 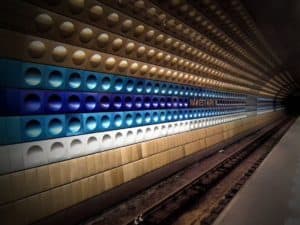 Many of the stations have changed names over the years, particularly since a great deal of them were built or designed during the Communist era. Leninova station, for instance, which once housed a giant bust of Lenin, was renamed Dejvicka (one of the stops connecting with the airport bus services) after the Velvet Revolution in 1989, and Moskevska (Moscow Station) became present day Andel.

Like the trams, the metro system announces the current stop, and the next one. What you’ll here is the Czech phrase ‘Ukoncete prosim vystup a nastup, dvere se zaviraji’, which means ‘Please stop getting on or off, the doors are closing. Next the announcer will tell you the ‘Pristi stanice’, or ‘next station’. You might also hear or see on the displays ‘Vystupujte vpravo ve smeru jizdy’, which means you will get off the train on the right (from the direction of travel), instead of the left, which is more common.

Tickets
The Transport Department in Prague (DPP or Dopravni Podnik Praha) offers tickets that can be used on any of its services, bus, tram or metro. (Interestingly, the DPP also maintains and runs the funicular railway on Petrin Hill, so your ticket is also valid there, and the chairlift at Prague Zoo!)

You can buy tickets from machines at the metro stations, or at certain large tram stops such as Masarykovo Nadrazi, or from some tobacconists and newsagents. Tickets work on a time basis rather than distance, so you can buy a 30 minute, 90 minute, 24 hour or 72 hour ticket (for the 72 hour ticket you will need to go to the newsagents or tobacconists in most cases).

Once you buy your ticket, you need to validate it as soon as you intend to travel. If you board a tram, there are machines onboard on the poles, usually with yellow arrows on, into which you insert your ticket and a date and time will be printed on it. On the metro, you validate your ticket at the machines in the station foyer before heading to the escalators. Keep your ticket safe as inspectors do operate on both the metro and the trams, especially in summer.

Please note, we are unfortunately unable to sell transport tickets from our office at Tynska 7 – a lot of people ask! 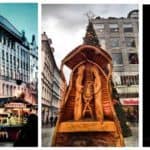 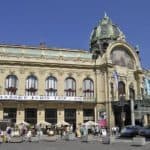 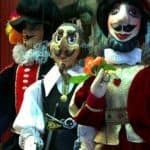 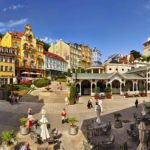