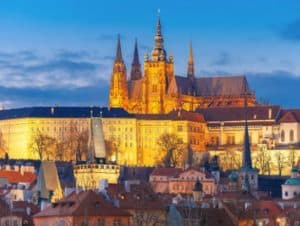 I would like to bring to your attention to one of Prague’s essential attractions.

Prague is a hotspot for historical and Awe-Inspiring architectural wonders. One of these sights is the Magic Disneyesque Prague Castle, sitting on top of a hill nestled in Prague’s Old Town quarter. The information on Prague Castle makes it a unique attraction that will make people’s heads turn.

This feet of marvel and wonder originates from 1152 years ago, during the year 870, It has gone on to become a jewel of one of the world’s major tourist attractions. Just imagine being able to see this up close and personal on a guide tour of the grounds It was during the tenth century, that Vratislaus the first and his son Wenceslas the Great constructed the Basilica of St George and the Basilica of St Vitus, which were made additions to the castle. The two spires from ST Vitus are unmistakable from across Prague. In the 14th century, King Charles the fourth came to power, regarded by most Czechs as the greatest King in history, and helped to expand and grow the Castle and its surrounding areas.

Fact: Since 1918 Prague Castle has become the seat of the ruling President

During the Hussite wars and consequent wars of the 15th and 17th centuries the Castle was damaged, looted and robbed. Powerful rulers of the Czech lands after this period have gentrified the site, rebuilding it to its former glory and preserving its cultural and historical significance to Prague’s continued history.

According to the Guinness World Records, Prague Castle is the World’s largest and oldest castle in the world.

The artefacts and treasures of Prague’s most important Royal and historical figures are kept in the Castle walls. It serves as a reminder of an eventful past and as a window into times gone by.

It is a well-known fact that thanks to the work of restorers, craftsmen and architects, Prague Castle is today again back to its former glamour. It serves as a window into viewing Prague’s steeped history and will continue to amaze and entertain people for centuries to come. This is one of the main sites that I truly recommend you see whilst on your stay here, a treasure trove of historical significance and wonder.

Stay tuned for part 2 of our ultimate guide to the top things to do in Prague.