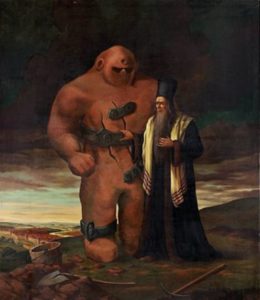 The Golem of Prague

One of the most auspicious and legendary tales in Prague is one of intrigue, mystery and some might say, dark arts. The Golem of Prague has fascinated people for centuries.

Originally made to keep the persecution against the jews at bay, Amazement and wonder surrounding the Golem of Prague still resonates today and has become a symbol of folklore in the city.
During the reign of Rudolf II, Rabbi Judah Loew created the golem to protect the Jewish quarter of the city and its citizens. At this time the majority of Prague Jewish people were being attacked and they went about their days in fear, until the Golem. Rabbi Judah Loew created the golem according to the Cabala, which specified that he be made of clay from the banks of the Vltava River.

A Jewish religious ritiual was performed by Rbbi Loew and from the clay’s of the Vltava river came the Golem. It was said that it could only be awakened by special incantations in Hebrew spoken by his maker. After an incantation the Golem would awake and he would do the biddings only of his maker, which included protecting the Jewish people in the Prague Ghetto. Rabbi Loew placed the Hebrew word ‘emet’ (truth) on the Golem’s forehead. As the Golem grew stronger with each incantation he also grew increasingly violent and started killing people. Some say this was due to a broken heart, but one will never know.

Rabbi Loew was then promised that violence against the Jewish population would come to en end if the Rabbi would destroy the massive scary Golem. Rabbi Loew ended the Golem’s life by removing the letter ‘e’ from ‘emet’ changing the word ‘truth’ to ‘death’ thus ending the giant’s life. It is said however that Rabbi Loew’s son brought the Golem back to life. Fact or Fiction? It’s up to you; have a light night wander through the Jewish quarter and see if you meet the world-famous Golem!

What makes this legend so captivating is the fact that the reports, passed down through the centuries put the final resting place of the humanoid clay gentle giant, in the attic of the synagogue. But alas, it is not open to the public. I suppose that some things are still left with an awe of mystery and intrigue behind this legendary tale of rising up against oppressive rule.

To see this site and many more other interesting places to visit whilst holidaying in Prague, check us out at https://trips-tickets.com/ And don’t forget to like and follow us on our Instagram (https://lnkd.in/exTzr9rc)
facebook https://lnkd.in/e8KWWqap)

Copyright © 2011 - 2022 Prague Trips & Tickets | All Rights Reserved
Manage Cookie Consent
To provide the best experiences, we use technologies like cookies to store and/or access device information. Consenting to these technologies will allow us to process data such as browsing behavior or unique IDs on this site. Not consenting or withdrawing consent, may adversely affect certain features and functions.
Manage options Manage services Manage vendors Read more about these purposes
View preferences
{title} {title} {title}