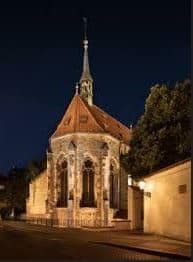 Located adjacent to the river Vltava sits one of the earliest forms of imposing Gothic Architecture in the city. In contemporary times, this is now looked after by the Natioonal Gallery who are responsible for its upkeep, as others have over the many gruelling and chaotic yesars of history. It is one true architectural feet of amazement that the world frequents year on year.

Saint Agnes Monastery was first built in the 13th Century by the Premyslar Pricess Agnes, along with her brother Wenceslas 1 (Not to get them mixed up with Wenceslas the great), they are both descendants of Saint Ludmilla and Wenceslas the Great (Wenceslas Square in the heart of the city is named after him). What is so fascunationg about princess agnes is that she built the monastery with her own bare two hands, along with her brother. They built the monastery and then built a hospital which bears the name Saint Francis.

Born into a life of luxury, Princess Agnes was betrothed to first to King Henry of Germany, but after six years of betrothal, that was annulled and instead, her father Ottakar 1 sought marriage for her and to join the great house of Premysal and King Henry the 3rd of England. The emperor though denied this as he wanted Anges for himself. She was betrothed to other powerful houses in Europe, but it got to a point that Agnes no longer wanted to be a pawn in the marriage game and instead, turned all of her suitors down and instead devoted her life to religion and poverty, looking after the homeless, as well as the sick and infirmed at the Saint Francis hospital.

Princess Agnes was well know self-sacrifice and kindness towards others.Along with this, it was her visions that could reportedly see future events occurring many years later. It was one evening that she was praying in her oratory that she got a vision of a glorious battle take place, a strapping young man on horse back, fighting valiantly, like a lion. The horse it stumbles During the battle of the Moravian field, this vision comes to fruition, with her nephew Premysayl Ottokar the second had fallen and died in battle.

With the fall of Communism and switch to Democracy, Pope John Paul the second ends up Canonizing princess Agnes for her devotion to the church, but also as a sign of good faith and good will for the bloodless revolution that took place on the streets of the Czech Capital.

To see this site and many more other interesting places to visit whilst holidaying in Prague, check us out at https://trips-tickets.com/ And don’t forget to like and follow us on our Instagram (https://www.instagram.com/travel_to_prague/), facebook (https://www.facebook.com/mcgeesghosttoursofprague)and linkedin (https://www.linkedin.com/company/80020878/admin/) accounts for incredible historical tales of the top things to do in Prague.