Prague is one of the most magical cities in the world and at this time of year, the atmosphere is even more electric. With Christmas markets on most of the major squares and decorations glittering against the backdrop of the famous buildings and landmarks, Prague is a wonderful setting for a Christmas break, and a great place to do some Christmas shopping. You can find unique presents in the markets and boutiques, which you’ll find around the main tourist areas. One of the largest Christmas markets takes place on the Old Town Square, just five minutes’ walk from our shop in Tynska street, and there you’ll find an array of traditional Czech decorations, foods and gifts, as well as live music and the ‘stable’ exhibit, with live farm animals, which is always popular with children.

Czech Christmases have a character all of their own, and although some of the superstitions and traditions are no longer widely observed (for example, tying rope around the legs of tables in the household to ensure protection from thieves and burglars) but you’ll still find some unique customs being practised.

You’ll find nativity scenes around some of the major historic sites, for instance on Wenceslas Square and on Kampa Island, beneath the Charles Bridge. The first of these appeared in Prague in 1560 in the Clementinum, which at that time belonged to the Jesuit order, and they imported the tradition from Italy. Originally these nativity scenes were only in churches but from the eighteenth century, they started to appear in towns and villages and in the squares of Prague, where the ordinary people could see them. Christmas trees also appear all around the city at this time of year, but these are actually a fairly modern addition to the list of Czech Christmas traditions, the first one coming to Prague in 1812. The nobility and more affluent families took up the custom and brought Christmas trees into their homes throughout the mid 1800s, and tended to decorate them with wooden carvings, gingerbread and sweets. You can still buy these sorts of decorations at the markets in Prague, if you want to recreate these early Czech trees!

One thing you might notice around Prague at Christmas which may take a bit of explaining is a lot of fish, either on decorations or swimming around in tubs on the streets of some of the outlying areas of the city. You might even see chocolate fish for sale in amongst the Christmas boxes and sweets in the supermarkets. The fish is actually a carp, and is the traditional Christmas dinner in the Czech Republic. Some of the best carp come from the fish ponds of Trebon, which were created in the 16th century by the influential Rozmberk (or Rosenberg) family who owned the lands there. These are brought up to Prague and sold from tubs on the street a few days before Christmas. Supposedly there are a hundred different ways to cook the carp, but one of the traditional ways to serve it is with potato salad. Some families even take the fish home live and keep it in the bath for a few days before preparing the meal. Fish soup is one of the most common starters. 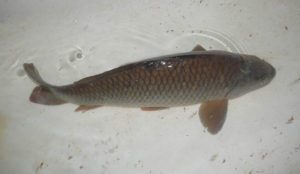 Unlike some other countries, for the Czech Republic Christmas Eve is actually the focus of the celebrations, rather than Christmas Day, and the main dinner is had on the 24th. Presents are given out at this time and are believed to be given out not by Santa Claus but rather by Baby Jesus, or Jezisek, but just like Santa, Baby Jesus also receives letters from children with their Christmas wish lists. You might see some representations of a Santa-like figure, a man with a log white beard and red robe. This is actually St Mikulas, or St Nicholas, who was a historical figure, a Christian bishop who lived in the 4th century. One story told of his leaving coins in shoes left out, and this idea of leaving secret gifts was one of the origins of the Santa Claus story (in fact the name, Santa Claus, is a corruption of St Nicholas’s Dutch name, Sinter Klaas). In the Czech tradition, St Mikulas is accompanied by an angel and a devil, and he acts as the judge of whether children have behaved or not during the year. If they have, his angel will give a gift. If not, the devil will give a ‘booby prize’, for instance a lump of coal. St Mikulas’s day is December 5th and on this day, you might see people dressed as the saint and his aides going around the city.

Some households attend mass at midnight on the 24th, although some churches hold earlier services for children, usually on the afternoon of the 24th. Christmas Day itself is seen as a time to relax and be with one’s family, and so you may find many businesses closed on the 25th. Our shop and office is closed on the 24th and 25th but will reopen again on St Stephen’s Day, the 26th December, and so if you do need any advice on what there is to do over the holiday season in Prague, you can always pop in and see what attractions are open or what tours are on offer. As always, you will find us in the historic Tynska 7 building, in a little cobbled lane just behind the Church of Our Lady Before Tyn.

Whatever you choose to do in Prague this festive season, however, all of us at Prague Trips and Tickets would like to wish you Vesele Vanoce a Stastny Novy Rok – Merry Christmas and a Happy New Year!